Pepper, the big secret of the sausage

Although pepper is a species that has been used for the seasoning of our stews for many years, it has not been until its rediscovery by haute cuisine chefs that has been able to recover its old value.

Did you know that there are more than 700 varieties of pepper? Its history dates back to ancient India, and it arrived in Europe in the 5th century BC. At that time, taxes were collected on pepper and it was also used as medicine, to cure stomach problems, for colds and was even recognized for its aphrodisiac properties. In the middle ages it was still a product of high value, trade routes were created to control these seeds and it was of usual change as a dowry in marriages and as payment in trials.

The flavor is more pronounced in white pepper and softer in green, although the scent is stronger in green and black. In our country, the usual one is black pepper, for its intense flavor and scent.

– Buy the peppercorns and use a grinder, the aroma is more intense in freshly ground pepper.
– Use it also in combination with the sweet, it will give an exotic and interesting touch that will surprise you.
– In combination with foods of neutral taste, such as pasta, you can enjoy all its flavor.

– Antioxidant effect thanks to ericoline essential oil
– Diuretic, vasoconstrictor and digestion improvement properties.
– Potential as an antibiotic against some bacteria.

The pepper in the Pedragosa sausage 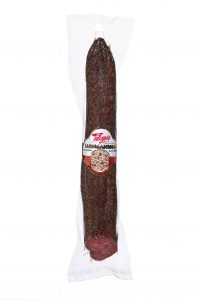 The original recipe of our sausage, from 1916, already contained pepper as an essential element, not only because of its scent and flavor but because it enhances the flavor of the meat and helps its healing.

Currently, the recipe for the Pedragosa sausage contains black pepper, a variety that provides anesthetic capacity, and leaves the mouth with a sensation between tingling and electric current.

For lovers of intense and aromatic flavors, we recommend our pepper sausage, made with meat and pork belly and seasoned with pepper and other spices of great flavor. You will not need more than a peak of bread or a slice with an oil point to enjoy a simple and delicious tasting moment.

SAVE & ACCEPT
Powered by